A cover crop, sometimes called green manure or catch crop, is grown for the sole purpose of being tilled back into the soil in the spring. A cover crop can be a grass, cereal grain, or legume. It provides multiple benefits and can be an inexpensive way to build better soil in your gardens. Cover crops are helpful for small garden spaces up to large acreages.

What Are The Benefits?

A key component of healthy soil is the presence of organisms. When spring comes and your cover crop is plowed into the soil, that material is consumed by bacteria, fungi and other organisms. However, a portion of the plant is not eaten, and this is what adds organic matter to the soil. Organic matter is essential – it provides storage for plant nutrients, improves soil tilth, and allows more air and water to be exchanged in the soil.

Western Washington receives heavy amounts of rain in the winter months. When your soil is not protected during this time by plants (even weeds), it becomes vulnerable to run off, erosion and compaction. Instead of allowing weeds to move in, plant a cover crop. Its root system will both hold the soil in place, and help penetrate heavy-textured soils to allow for better air and water circulation. The top growth, known as the cover crop canopy, also reduces the pounding of rain drops that can compact soil.

If your soil is left bare, many valuable nutrients can easily leach out of the root zone when it rains and trickle down into the water table. Also, those nutrients can get picked up by rain or melting snow and end up in ditches, streams and ultimately in Puget Sound. This is not where you want them to be. (If you use a cover crop, this problem can be avoided.)

As your cover crop matures, it begins to absorb nutrients left over from previous fertilizer applications and incorporates them into its plant tissues. The nutrients are now safely stored until spring when your cover crop is cut and tilled back into the soil. As the cover crop begins to decompose, those nutrients will become available to the new planting. Grasses and cereal grains are more efficient nitrogen scavengers because they grow very quickly in the fall. Legumes do not reduce soil nitrate levels because they grow more slowly during this time. One of the best benefits of a cover crop is ‘fixing’ nitrogen. Only legumes can provide this because they have a mutually beneficial relationship with rhizobial bacteria. These special bacteria form wart-like nodules on legume roots that transfer nitrogen from the atmosphere down into the soil and make it usable as plant nutrition. In return, the bacteria receive sugar from the legume.

Another advantage of a cover crop is weed suppression. A cover crop competes with weeds for light and nutrients. Research has found that many cereal cover crops contain natural herbicides which can reduce the growth of weeds and vegetable crops (from Cogger et al, 1997). This research also showed that when cereal was planted with a legume, the herbicide effect was reduced. 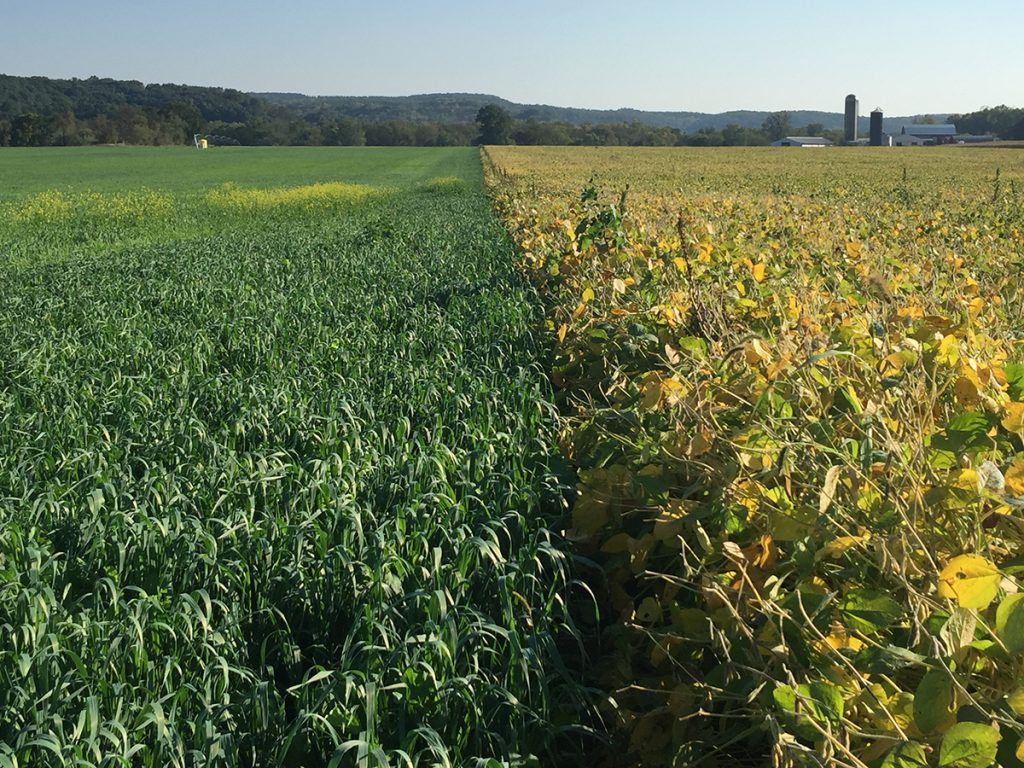 Which Cover Crop Do I Choose?

As great as all these benefits are, no one cover crop can deliver all of them. You will need to determine which characteristics are most important to you, and choose the appropriate cover crop.

Make sure that the cover crop will be well suited for your planting site*. This is because environmental factors, such as minimum and maximum temperatures, soil type, drainage, rainfall and day length play very important roles in cover crop success. Here are some helpful tips:

How Do I Plant a Cover Crop?

After your last crops are harvested, turn soil under and rake it smooth. The smaller the cover crop seed, the smoother your garden bed soil needs to be. Once your seed bed is prepped, broadcast or hand seed. Seeds require good contact with the soil and protection from drying out. To ensure this, cover the seeds with soil one-fourth inch deep. If you use a rototiller, do not go deeper than 2 inches (if planted too deep, the seeds may not sprout). In established gardens, fertilizing is not required — there should be enough nutrients available. You may need to irrigate a cover crop planted in late August or early September for better germination.

When Do I Turn it into the Soil?

The best time to turn the cover crop into the soil is when winter is almost behind us and spring is creeping in — ideally about three weeks before you plan to plant your first crop. This is most critical so the cover crop doesn’t go to seed or flower. If the cover crop goes to seed, it might become a weed (especially true for vetch). Do not till your cover crop if the soil is too wet, this can damage your soil structure. However, if you wait too long the cover crop can become woody, which means it will decompose at a much slower rate. If you won’t be able to till the cover crop on time, mow or chop it. Be sure to turn (bury) the cover crop to a depth of three to six inches.

What are the Disadvantages?

Just like everything else in life, there are pros and cons to using a cover crop. These concerns can be minimized by selecting the appropriate crop, and managing it with these concerns in mind.

The investment of using a cover crop requires money, time and energy to plant, incorporate, and manage to get the benefits you were hoping for. Cover crops can be a great asset for your garden by adding organic matter, fertilizing soil, protecting water quality and suppressing weeds. So, if you find yourself not quite ready to put the tools back in the shed in the next few weeks, give cover crops a try.

Get to Know Us